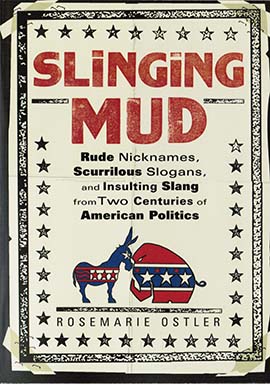 Slinging Mud gathers the most memorable words and expressions from two centuries of going negative — a tradition as American as apple pie. President Washington's enemies called him a tyrannical monster and a hyena, not to mention a cheapskate. So it has gone ever since.

"An entertaining look at how American rhetoric and electioneering has shaped our perceptions of national politics."
–Bradley Wright, Portland Book Review, Nov. 3, 2011

"Ostler gives us the good lines but also puts them in historical context and digs out fascinating bits about their origins."
–Steve Levingston, Washington Post, Aug. 19, 2011

"The result of considerable research into American politics."
–Bill Miller, Sr., Missourian, May 2, 2012